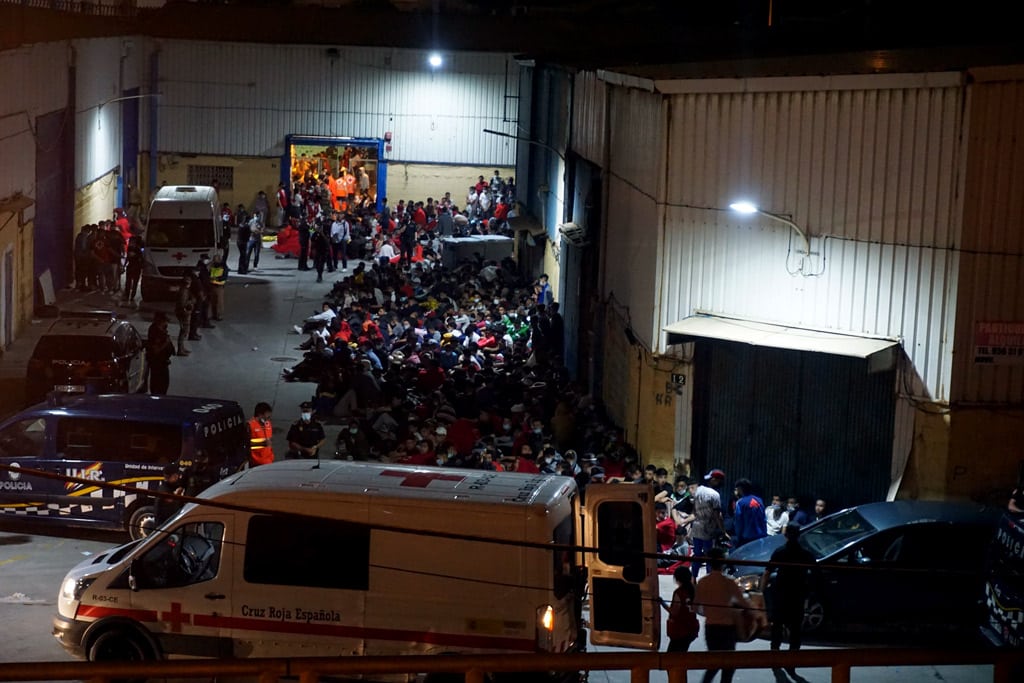 We are in #Tarajal. There is a large military presence, tanks have been deployed. We have seen that smoke has been released for at least one hour in the strip between the Moroccan and Spanish border posts. We don’t know if it was tear gas.

We can see many people on the other side, from the beach to the mountains that rise up near the fence. There is a group of people up on the fence. At the moment, access to the warehouses – which is the place where newly arrived people are moved to quarantine – has been limited, bearing in mind that early this morning they were overflowing with people. We have been able to observe that the police are using force, using batons against possible asylum seekers, and therefore, violating these people’s right to international protection. There are many minors among the arrivals, we cannot talk about numbers at the moment. We have heard the media talking about an invasion.

THIS IS NOT AN INVASION. Let’s remember that invasions are usually military operations. Today, in Ceuta, they are people who are seeking help because of the emergency situation that they are living in Morocco, while censorship on the other side has silenced these situations. This is the result of one of the most unequal borders in the world and of migration policies that externalise the management of our territory and violate human rights systematically and with impunity. From No Name Kitchen we would like to remind the press of the IMPORTANCE of reporting providing a context. There is no point in alarming the population. It is unethical to present this situation as if it was about ones against the others. A journalist must provide context, explain what is happening and never dehumanise a person for no reason. Such a situation does not come out of the blue. A situation like this one is the consequence of many factors, among which we find a colonial past in which Spain and Europe have an important responsibility for the situation in our neighbouring country Morocco, from which people are trying to escape. Interior Minister Marlaska assures that 2,700 people have already been returned and he declares that they are working on the “immediate return via the legal channels in place”.

The “forceful response in the defence of our borders” cannot use as a response the instrumentalisation of the pain and hopes of thousands of people, and the breakdown of the principle of proportionality. We demand legal guarantees for people seeking international protection. We point out that the tanks of the Spanish army are facing unarmed people.

On a day like this and on the anniversary of Ahmed’s death, we want to remember him. Ahmed is a Moroccan who died on 13 May 2020 in Bosnia, in a village near the borders of the European Union because he wanted to take a shower. Many people from Morocco who decide to migrate, prefer to fly to Turkey and follow the Balkan Route, which takes years to travel, where they risk their health and where they have no rights for years.

Many Moroccans tell us: it is very hard, but it is better to walk than to face the Mediterranean Sea. Ahmed was living outside the official refugee camp of Miral (paid for with the same EU money that closes the borders), which was full and would not accept any more people.

These are the stories that should really shock us.

HOW THE SYSTEM DEHUMANIZE PEOPLE IN PATRAS, GREECE.