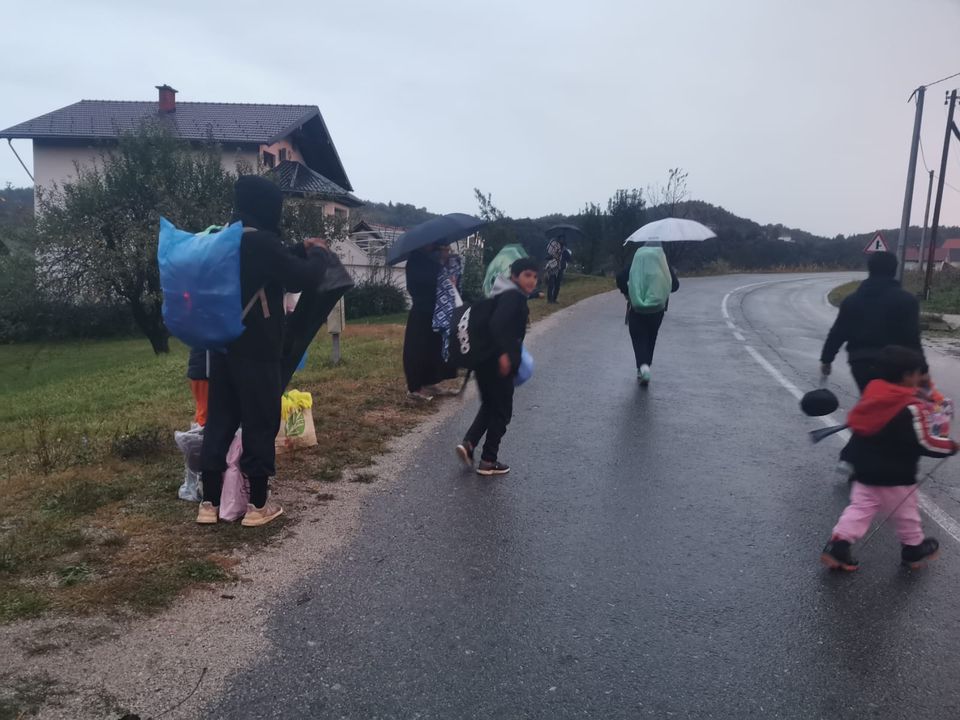 These three families travel together. They are from Afghanistan. There are 8 adults and 8 children and babies in the group. They have spent a lot of time in Velika Kladuša these last few weeks. They used to live in a family refugee camp, about 40 kilometers from here.

A few days ago they went to the ‘game’ – that’s what refugees call it. A ‘game’ that consists of walking hidden through the woods for days until they can get into a European Union country where they are allowed to request for asylum. Croatia and Slovenia – which are both bordering Bosnia – are European Union countries, but they often deport people illegally, instead of giving them the opportunity to ask for this protection.

Yesterday they were deported illegally, once again. They spent the night in a cold garage that a neighbor lent them, but before dawn when it was still very cold, he told them that they had to leave. He was afraid that the police would discover them and that he would get into trouble. That’s how things are around here: offering any space, a roof over the heads of exhausted children, can get you into trouble with the police.

They called us. They have a telephone for the whole group and when they go to the ‘game’, they hide it somewhere safe because during these deportations – which are as common as they are illegal – the police usually confiscate phones or break them and leave people without their only possibility of communication. We brought them soup and hot tea and blankets and warm clothes. The weather is already very cold here and yesterday was a terrible rainy day. We could not spend time with them either, because that can also get us into trouble with the authorities. That’s how life is here.

In the afternoon they called us again. They had gone into an empty house, under construction, to spend the day protected from the rain, but some neighbours called the police and some officers came to throw them out. A few days ago, before their last game, they were camped right in front of the official refugee camp near Velika Kladuša, and the police came to throw them out as well. They dismantled the tents. It was not raining that day, and they stayed there sitting on the grass not knowing what to do.

The criminalization of refugees and of who are standing by them

Yesterday they decided to leave Velika Kladuša. They know of an abandoned house in a village about five hours walk from here. They asked us if we could please transport the youngest of the families and the grandmother. “I had to tell them we couldn’t. I still have a heavy heart since. I cried from helplessness,” says the volunteer who had to watch these families leave to face five more hours of walking in the rain to reach an abandoned house where they could stay for a few hours in peace, to manage to reach a place from which no one would throw them out.

Taking a person by car, as we were asked to do, would mean that, if we were caught by the authorities, we could be accused of being human traffickers. Even if we don’t leave the country; even if it’s just to go from one point in the city to another; even if a person is sick and needs to go to hospital, we have been told that it is forbidden to take them by car. This has been the case in Velika Kladusa for two years now. And we can’t stop being outraged and feeling deep pain every time we have to tell someone that they don’t even have the right to go by car.

The reason that many people are not in a refugee camp is not that they do not want to, it is because they cannot. For several weeks now, no organization has been allowed to transport them to camps. And in Velika Kladuša the camp is only for men or minors who travel alone, so families are not allowed to enter.

New arrivals are forbidden to enter the camps – even when they are below capacity – if they were not registered before. Many people lose the document proving that they can return to the camp because of a common practice of the Croatian police when pushing people back to Bosnia, which consists in stealing or burning their belongings.

On other occasions, people do not want to go back to the camps where they lived, because they are forced to undergo a ten-day lockdown. And right now, with winter just around the corner, people are trying more than ever to attempt the “game” before the snow starts.

We don’t understand all this unnecessary pain we are causing people with our border policies and the racist environment around us. And we also do not understand that there is no more mobilization among the citizens of the European Union to end this life-destroying border system.

This week a new Migration Pact arrived, but it does not improve anything that was already there. It still does not require member countries to comply with the reception in a dignified manner and following all the agreements signed over the years; it does not provide a solution for those who are at the doors of the European Union; it offers no alternatives for people to be able to cross #borders legally and safely to ask asylum.

One of these families was in Moria before. Many people who are in Bosnia and Herzegovina spent years in Greece, but their asylum was denied. At the risk of being deported back to their country, they decided to walk the Balkan route to another European Union country where they could resume their asylum process. But they found closed doors and a lot of violence. There are people here who have been on a migration route for up to 3 or 4 years. Many, who left their country with all their savings, have already been ruined.

LIFE AT THE MARGINS: TESTIMONIES FROM LIPA CAMP