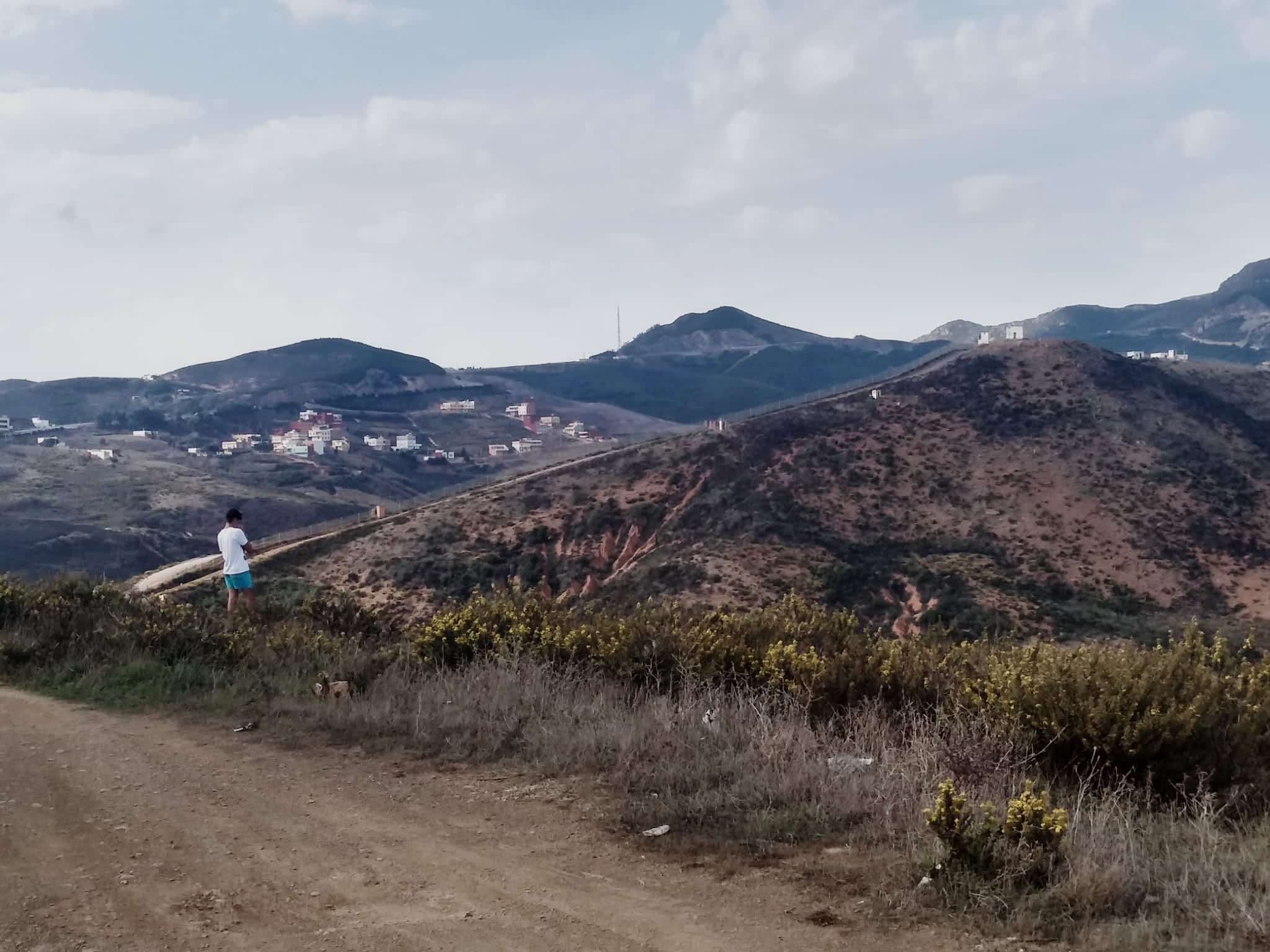 The smell of ferry and misfired petrol welcome me to Ceuta, that strategic pene-exclave of the former Spanish colonial force, whose long metal frontier seeps grey clouds and cold, daily guests of this peculiar military village. ‘And what’s that?’ the customs officer asks me curiously as she rummages in my rucksack. ‘Well, a Soviet Union camera,’ I answer. ‘How much did you pay for it?’ she continues with curious suspicion.

She smiles and lets me pass. It does not take me long to find humanity again in a place designated to annihilate it.
Ceuta is the territorial continuation of the Moroccan coast in all spheres, from the religious to the social one. The muezzins still chant five times a day, the rubbish falls without gravity from the hillsides and the traffic emits black fumes from long-ago expired vehicle inspections.

The centre, it must be said, is a quick glimpse of any peninsular high street with its strictly Inditex shops, terraces, tapas, perfumes, lottery and a relaxed but heartfelt feeling of national pride, a sudden and ephemeral appearance that vanishes as quickly as it began.

Minors living on the streets

Five minutes away from the main street we meet some underage children, all Moroccans, who have escaped from the centre for unaccompanied minors and prefer to live out on the street. ‘We sleep up there’, they say proudly, pointing to the roof of a petrol station. To get there, they risk their necks every day juggling with barbed wire and considerable heights. A local policeman speaks to the boys in Arabic, not bothering to hide his palpable contempt for them.

‘If it were up to me, I’d send them back to Morocco’, he comments without middle ways, criticising the institutions that try to regularise and shelter underage children. ‘Some time ago, some of them died trying to get on to that petrol station’. ‘We were better off with Franco’, concludes the character of this pathetic anachronistic theatre with his punch line. Not to mention that he probably was not even alive at the time of the dictator.

‘I don’t like being in the centre for unaccompanied minors‘, says a boy, when he is being given a pair of new socks. With almost virile pride, he shows me several deep cuts on his right shoulder.’ A guard offended my mother, and we fought, I don’t want to go back’.

The centre, on the other hand, means guaranteed food and health and bureaucratic security for many kids. There are more than 300 boys in the centres, and we estimate that more than 30 are living out on the streets.

It is very difficult to be sure about the real age of these boys, but I am surprised to see a couple who seem not even 9 years old, two opposite archetypes moulded in the hard street survival among ‘adults’: one has the character of a leader and the other of a protégé.

The latter, with shame, tells us that he cannot sleep because of severe pain in his urethra, but he doesn’t trust in going to the emergency room, i.e. back to the centre for unaccompanied minors.
Harshness is written all over the vigorous faces of the fake adults. Only rarely is there a tender hint of their real age. They are children, after all, even if they try to bury their childhood just to survive.

One day, a half-boss of the group, a tough and imperious character, helped us to stick some posters with the tape and, surprisingly, the slow dedication to the simple mission turned into a game of extreme tidiness and attention – cutting the tape, sticking it meticulously without folds and observing, almost to the limit of obsessive-compulsive disorder, the correctness of the operation.

Outside the Lidl supermarket, one of the busiest meeting points, some local women watch us, surrounded by street children: ‘They must be from some NGO’, they say, talking among themselves, focusing only on our presence and completely ignoring that of the children.

If they manage to stay in the centre for unaccompanied minors until they come of age, there is a good chance of speeding up the temporary residence procedure. M. entered with his family before Covid – ‘leave me here, I’ll manage somehow’, he told his parents, who crossed back to Morocco, leaving behind the fence a son, and two nations that were to cool their diplomatic relationship. When M. reached 18, nobody informed him that he had obtained temporary residency, which allowed him to legally cross to the mainland.

After the three months of validity, reapplying for a new residency is more than difficult; it is almost impossible. In fact, the government requires for this procedure that the applicant has an income and health insurance, which are difficult to obtain if one does not have residency. A vicious circle that can be bypassed by entering the CETI, the centre for foreigners that lets in sub-Saharans but usually rejects Moroccans.

Are there levels of privilege within the migrant community? And, is there a need to remember this, or does highlighting it create more obstacles than solutions? We have all recently become aware of the difference between a first-class migrant and a second-class migrant, distinguishing (racially) a Ukrainian from a sub-Saharan, a Maghrebi or a Syrian. The greater consideration given to one group directly harms the others, rendering them invisible and highlighting even further their “otherness”.

But, in the case of Ceuta, is this imperfect difference in human rights also experienced? Are unequal preferences dictated by politics or by society as a whole important? It is sad to confirm the theory, but here too, the Others have levels of priority according to their origin, both in the associative and administrative spheres.

‘It is better not to mix Moroccans with sub-Saharans. It’s sad, but we have tried it many times and it doesn’t work’, says an activist, detailing the causes. The deep cultural differences and the disparate and incompatible characters harm young Moroccans, condemned a priori with the stigma of not wanting to integrate into a complex system that, in the end, disadvantages them compared to all other migrants trapped in the limbo of Ceuta.

In fact, the CETI, which should welcome all types of migrants, regardless of their nationality, in practice limits itself to protecting only sub-Saharan Africans, under the protection of unwritten policies and unofficial directives.

In the CETI, temporary residence procedures are slow but safe and, if they are extra lucky, they can be transferred to a CETI on the mainland for reasons of space or internal organisation and thus, leave the legionary hell of a hostile island-city.

Another paradigmatic case is that of S., a young woman of Moroccan origin born in Ceuta who, at the age of 18, still has neither a passport nor Spanish nationality. Given that the Spanish state legislation still has the archaic ius sanguinis (direct inheritance of nationality from parents to children), S. is paradoxically unable to live a normal life as a Spanish citizen, despite having gone to school and having lived her whole life in the enclave.

Everything is pretty slow in Ceuta and the achievements in judicial matters are not so many as expected. Nevertheless, we don’t allow the others to become invisible; that urban furniture that, legally or illegally, will cross the sea and forget about this cloudy limbo.