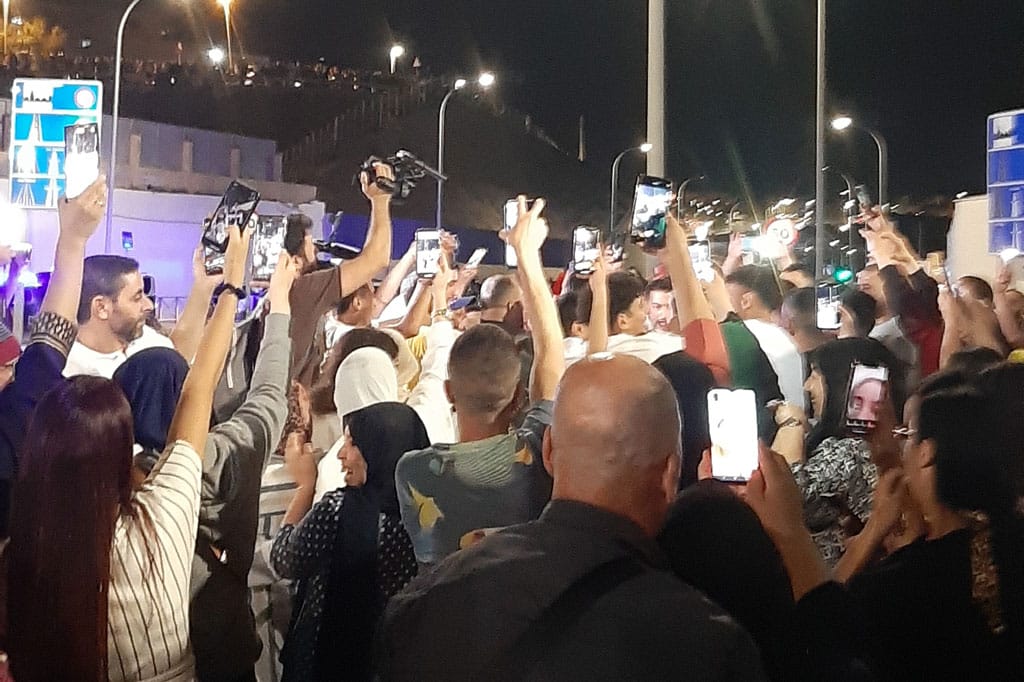 Yesterday at midnight, the land border that separates Ceuta from Morocco was opened, after more than 2 years closed, but only for some people. On the 30th it will open for workers, although more requirements will be needed than before the closure, according to information from the central government. The No Name Kitchen Ceuta team went to the Tarajal border to know about the situation and witness the first entries and exits. We were able to corroborate the information that we knew from the Spanish government: the agreement signed with Morocco will make transit between Ceuta and neighboring cities more difficult than ever.

There was a very festive atmosphere in the Tarajal area. People from Ceuta sang and cheered the opening of the border. There are many families in Ceuta who have been separated for more than two years and who had no other way of reuniting because they cannot cross to the Peninsula (due to their administrative circumstances and many difficulties it is almost impossible to regularize their situation) so, the only way to go to Morocco is through this land border. No Name Kitchen joined this joy. For a movement like ours, which advocates freedom of movement and legal and safe pathways for migration, an opening of a border is a reason to celebrate.

However, as the night went by, we could see the consequences of the increased restrictions on the border. In 75 minutes in front of the fence, two people entered from Morocco (it was estimated that throughout the night around 300 people, according to official sources, and about 900 would travel from Ceuta to the neighboring country). From the central government they had already reported how the agreement with Morocco will impose more entry requirements on people living in cities near Ceuta than those that existed previously. Now, those who worked here before 2020 ended will need many more requirements to get back to their jobs. Many documents that we in No Name Kitchen know are not easy to obtain and that will leave many people without the opportunity to come to Ceuta to work as they did before the pandemic began.

The more borders are closed, the more dangerous it is to migrate

The main reason for us to be concerned about these new restrictions is because in those more than 5 years that No Name Kitchen has been working at the borders, we have been able to verify that the more difficult it is to migrate, the more people put their life at risk. Our organization is present in places like Greece, Serbia or Bosnia and Herzegovina where many people from Morocco have arrived through Turkey and, in order to avoid the danger of the sea and these fences in Ceuta or Melilla, they venture to the so-called Route of the Balkans which can mean up to 2 or 3 years of life in which people face many police beatings and are forced to live on the streets. We know people from Morocco who have lost their life at the borders that the European Union has at the east of the continent.

In Ceuta, No Name Kitchen denounces the situation of people forced to live on the streets. Right now, all those people are minors. They entered Ceuta a year ago when thousands of people arrived from neighboring cities. They fear being returned illegally to Morocco, as happened in August with other minors, and for this reason they decide to live hidden in the streets. Many of them have their families only a few kilometers away, on the other side of the border, but they cannot see each other because of these restrictions. They do not want to return to Morocco, because they could then not return to Spain in a regularized way. And on top of that their families, because of the situation, have been left without the source of income they had, which was based on the cross-border economy.

We share information from Solidary Wheels, a fellow organization of No Name Kitchen carrying out its work from Melilla:

“There has always been a lot of trade between the two continents through this border, and now they want to put an end to it suddenly. Leaving thousands of people without job nor options to get a living”.

THE KITCHEN IN SID KEEPS COOKING: NOTHING COULD STOP IT

NEWS FROM THE BORDER BETWEEN POLAND AND BELARUS