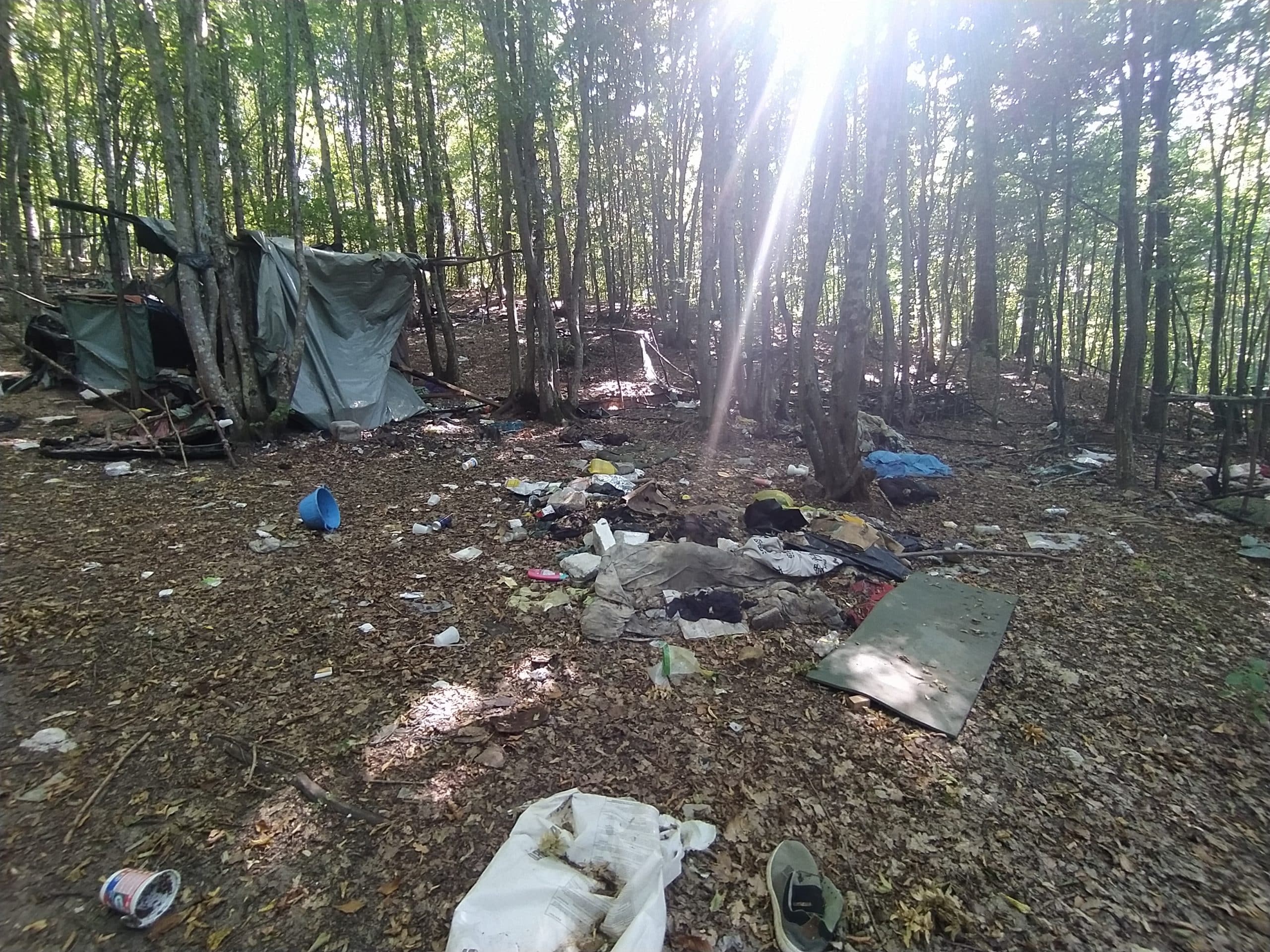 A community was once here. In the fall of 2020 the first groups of largely Bangladeshi migrants arrived in buses on the eastern side of the Una Sana canton. They numbered in their hundreds, and as they made their way west and towards the European Union, they encountered the all too familiar violence of the European border regime. Having been pushed back illegally and often violently into Bosnia, and with the formal camps and other squats being full, the new arrivals started to settle in a forested area on the outskirts of the town of Velika Kladusa. The informal settlement on this embankment eventually became known locally as the ‘Bangladeshi forest’.

With the assistance of local people and international activist groups, the Bangladeshi migrants erected tents and built basic wooden structures to keep themselves sheltered from the approaching harsh weather. The donations of clothing, sleeping bags, tents and blankets, those living in the Bangladeshi forest managed to survive the EU border and the harsh conditions. As COVID-19 spread to the region in 2021 up to 600 Bangladeshi migrants were living in the area.

The settlement lasted for roughly a year and  half. In this period of struggle, No Name Kitchen activists along with others contributed to supporting the community that developed at the site. For some local Bosnians and international volunteers, residents of the forest became friends and comrades in the struggle against the violent borders of the EU. Local people and activists recall visiting the settlement, not just to provide humanitarian assistance, but to spend time with people on the move, to share moments, ideas and feelings – to reassert a sense of humanity in conditions which would otherwise be inhumane.

By the start of 2022, many of the residents of the Bangladeshi forest had moved on. Many found a way through into Europe, finally completing the ‘game’ or survival. Some of the former shelters started to disappear underneath the soil and dirt of the forest, as rain and snow swept and submerged items that migrants had left behind.

On the 19th of July 2022 some of the same people and organisations who had supported people on the move in the Bangladeshi forest gathered there again to  clean and clear the area of the remnants of the camp. Also in attendance were two people on the move who arrived to lend their support to the teams. We gathered under the shade of the canopy to pick up the items that had once been crucial to the survival of people in this space. At times, cleaning up the former Bangladeshi Forest squat feels less like a clearance and more like archaeology.

Some items are partially buried in the ground, pressed into the earth through the pressure of footsteps and the passing of time. Every item picked up and placed into a trash bag was once bought here to serve a purpose; so that people could keep warm, so that people could stay dry. So that they could stay clean, and retain as much of their dignity as possible. And despite the challenging conditions in the camp, those who remember the time that the makeshift camp was active recall how many of the makeshift camp residents not only survived with each other, but would invite local residents, visitors and activists into their tents to provide hospitality and tea with what little they had. It felt as if we were not merely collecting trash, but picking through the debris of people’s lives, and rediscovering the personal and intimate connections that people forged with each other at this very site.

Migrants will come to sites like this, and they will leave, hopefully eventually reaching their intended destinations. New migrants may arrive – but local communities will also remain in the spaces of solidarity and survival such as the small Bosnian settlements around the Bangladeshi Forest.

If we are attentive and if we remain politically engaged, what will also remain are the connections, and solidarities that were once formed in spaces like the Bangladeshi Forest. As we sat eating cake after the clean-up, we thought not just of the work done, and the lives of people who once lived here, but of the legacy which we might carry forward. By working together, alongside the communities who live among these sites of struggle we create shared experiences and shared understandings. Moreover, through this type of joint action, we produce and strengthen the bonds through which we can resist the injustice, of Europe’s violent borders.

“MY NAME IS ROHULLAMEEN, I’M 17 YEARS OLD AND I’M ALL ALONE”